Are Overlooked Causes of Gut Disruption Keeping Your Child Sick?

If your child is struggling with a health condition and you've already tried going gluten-free and dairy-free?

Are you avoiding sugar, artificial colors and flavors, additives, and preservatives? Do you feel like you’re doing all the right things yet not seeing your child’s health improved like you hoped it would?

You are not alone!

In my last video, I talked about how at the root of many of the common health challenges children is gut disruption.

What the heck is causing our kids' guts to be so disrupted?

And why aren't they healing even after we eliminate some of the trigger foods and give them probiotics, etc.?

What I’ve found in my practice is parents have already tried eliminating gluten and dairy and so on. They know their child's food triggers, but they're never able to add these foods back into their child’s diet. Often times they have to keep eliminating more and more foods.

Is that the case for you? Let me know in the comments below. 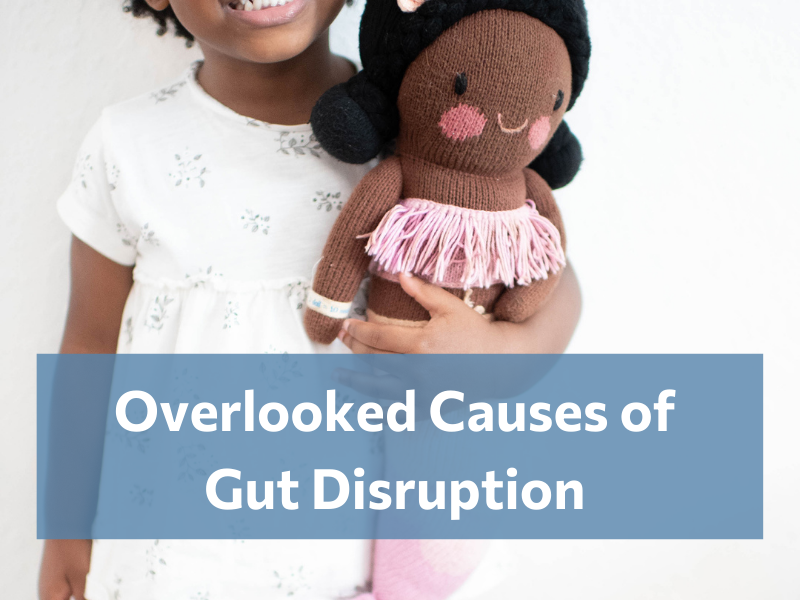 What are some of the overlooked causes gut disruption?

Before I talk about the causes, I first want to say I am in no way throwing mamas under the bus. I'm just stating the facts on what can cause the gut disruption.

When I'm talking about these factors—most of the time it’s beyond our control. It just happens. But you should know that is all fixable even if it feels like you’ve tried everything.

There are still root causes that have to be addressed that you may not know about. And that's what this whole video series is about. So for those of you who don't know me -- I'm Robin Ray Green. I'm the adult and pediatric specialist at Detox Rejuvenation. And I wanted to share with you why so many kids are struggling today and the overlooked causes is gut disruption.

Gut Disruption Can Start at Birth

It can start with a C-section birth. A lot of times we don't plan on that happening. We want a natural birth and circumstances are such that our child doesn't get to go through the birth canal, and they don't get exposed to mom's good bacteria to inoculate their baby’s gut. That's the first stage at which the gut can become disrupted.

Then if for some reason, mama, isn't able to breastfeed. A lot of the good bacteria and immunity is passed along through the breast milk. And they're not going to get that in formula. Again, sometimes this happens despite our best efforts.

It happened to me with my firstborn. I was not able to completely breastfeed and I had to do some supplemental formula. So I understand how heart-wrenching it can be when you want to breastfeed and then you can't.

Another factor that is really overlooked and really honestly not addressed is fetal toxin transfer. And I learned about this from Sinclair Kennally at Detox Rejuvenation.

And this is where, as a protective measure, mom's body offloads some of her heavy metals and aluminum and other toxins to the fetus in an effort to help her own body.

The first born child ends up starting off on the back foot because their toxic burden is already so high.

Glyphosate, the active ingredient in the herbicide Round Up, is an approved as an antibiotic. So, when we eat foods with glyphosate we’re getting continual micro doses of antibiotics.

Medications, particularly antibiotics may absolutely be necessary, but they're still going to disrupt the gut because they're indiscriminately killing the bacteria in your gut. And that has to be dealt with and the gut has to be restored.

While they may be necessary, antibiotics still disrupt the gut and can affect the immune system, the skin, and a whole other host of health problems can arise from overuse of antibiotics.

We’re exposed to industrial chemicals all the time. A perfect example is fluoride. Fluoride is often put into the water. It's meant to protect our teeth, but actually fluoride can be very damaging to the gut and can cause a whole host of other problems, which I'll talk about in another video.

There are thousands of other industrial toxins in the environment that we’re being exposed to and we don't even know it.

I ran industrial toxicant panels on my family recently, and all of us had really high levels of MTBE, which is a gasoline additive. And I found that really shocking, but then again, not super surprising because where we lived was near two busy roads, which I'm sure that factored into that exposure.

Industrial toxins can absolutely disrupt the gut. Very few practitioners are looking for them. And if if they’re found you have to know the right things to do to help release those toxins from your system in a safe and effective way… well, that's a whole other conversation (stay tuned… more on this soon).

Another factor that can seriously disrupt the gut and cause a whole host of issues is mold exposure.

That doesn't necessarily mean that you are living in a moldy house. It could be a very short mold exposure at someone else's house, in a hotel, or at school. Most people don’t realize that mold colonizes in the body really, really quickly, especially in an EMF environment. And that can cause constant gut disruption.

We'll talk more about mold as a root cause in a later video, but just know that when, when we're looking at the health picture and investigating root causes, a lot of times there is a mold exposure, especially when there's a chronic illness that isn't resolving, and especially when the person is sensitive to chemicals, to a lot of different foods and other things we're always thinking…

…Hmm, is mold a part of this picture?

So those are some of the causes of gut disruption. 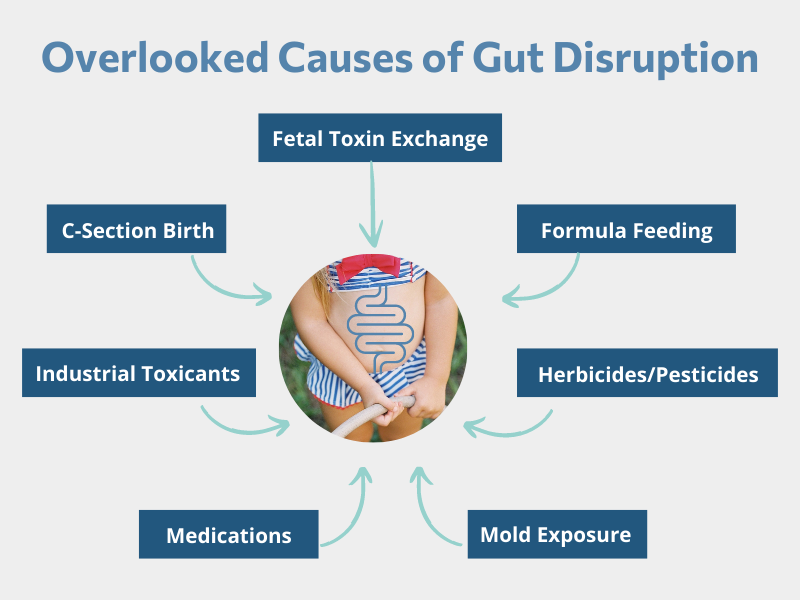 Are any of those resonating with you? Is there one you had no idea about?!?

Let me know in the comments below! I look forward to hearing from!

Yes, my boy is basically meat-only at this point because pretty much anything else we try to add in makes him rashy and itchy (well - rashier and itchier). If I could get him to understand / try intermittent fasting, I would totally do that. But… he’s 3.

I’ve scheduled / requested an appointment with you for early July and I really look forward to hearing your thoughts. I’m definitely thinking fetal toxin transfer and / or mold may be in play here. Thanks for these resources!

I'm so sorry to hear it and yet all too common these days, especially with the root causes you're thinking may play a part. I look forward to chatting with you soon! xoxo